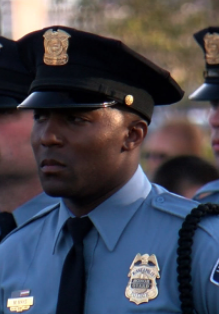 Incident #1
In 2017, Minneapolis police responded to a house alarm that was accidentally set off at the home of J LeMay. One of her kids had tripped the alarm by mistake, and when the home security company called, LeMay told them to cancel the alert. But the cops were already on their way. One officer went to the front of the house and was met by one of LeMay’s kids, who told the officer there was no problem. But a different cop, officer Michael Mays, went around the back of the house, scaled a privacy fence, and ended up in the backyard.

There, the cop was greeted by the LeMays’ service dogs, Ciroc and Rocko, both of whom were 5-year-old pit bulls. Mays says Ciroc “charged” him, but his body camera footage shows the dog walking toward him, wagging his tail. Mays backs up, Ciroc keeps approaching, and Mays shoots it in the face. Ciroc runs away, but at that point Rocko moves towards Mays, again in a friendly manner. Mays then shoots Rocko multiple times. Both dogs lived.

Achievements of a lifetime